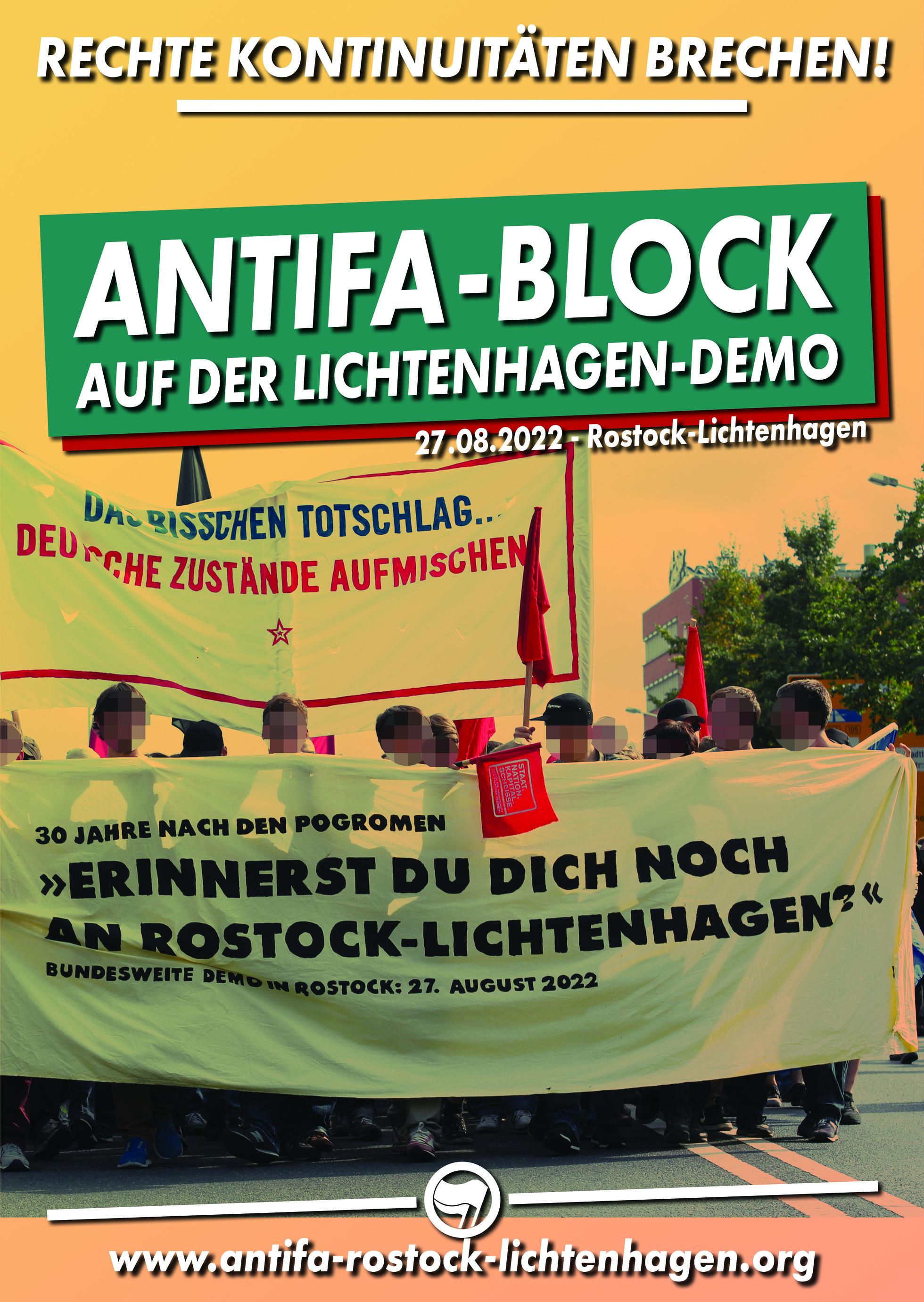 Between August 22 and 24, 1992, the largest racist pogrom in the history of the Federal Republic of Germany took place in Rostock-Lichtenhagen. For several days, hundreds of right-wing radicals attacked the “Central Reception Center for Asylum Seekers” (ZASt) and an apartment building for Vietnamese contract workers with stones, bottles and Molotov cocktails. They were supported by thousands of cheering residents. The Vietnamese residents of the apartment building set on fire and their supporters were able to escape at the last minute via the roof of the building. The attacks were preceded by numerous antiziganistic reports in the media, which created a mood against Sinti and Roma living in the ZASt.

Those who speak of this pogrom 30 years ago must not remain silent today when it comes to institutionalized racism or the criminalization of the anti-fascist movement. The ’90s are long ago and many of us know the pogrom of Rostock-Lichtenhagen only from media reports or stories of older friends. Since then, we have continuously experienced a high level of right-wing violence. The NSU murders, attacks in Munich, Halle, Hanau, right-wing networks in the police and military. The list of events that have shaped our political consciousness in recent years is long.  Thirty years ago, the police and the Ministry of the Interior watched the pogrom unfold in Lichtenhagen. Antifas who opposed the mob were arrested, neo-Nazis were allowed to go free. The consequence the state drew from the incidents was to effectively abolish the basic right to asylum and to place refugees in camps far away from the cities. Less than ten years later, the terrorist series of the NSU network began. For years, neo-Nazis murdered migrant-read people. The police searched for the perpetrators in the vicinity of those killed, leaving no racist cliché unturned. In 2015, many people fled to Germany. Burning shelters were the order of the day. In Heidenau, riots lasted for days. In 2016, Rostock again saw right-wing mobilizations in the spirit of Lichtenhagen. Over several days, neo-Nazis repeatedly gathered in front of a housing project for refugees in Rostock-Groß Klein. When antifascists intervened and confronted the neo-Nazis, police officers arrested several antifascists, but let the neo-Nazis go free. A short time later, the housing project was terminated by the city and the refugees were relocated.

Not much has changed since Lichtenhagen. The state has no interest in fighting right-wing violence.  While numerous people have fallen victim to right-wing terror in recent years, in return the anti-fascist movement in Germany has been subjected to one of the harshest waves of repression in the last decade.  Violent Nazis are turned into police informants and receive ridiculous low sentences - antifascists go to jail just for standing up to Nazis. Police torture and kill migrant-read people, make plans to overthrow the state and prepare the hunt for leftists. Refugees are isolated in secluded camps so there won’t be trouble.

But what do we expect? Whether it’s Nordkreuz, NSU 2.0 or right-wing chat groups: the state apparatus is riddled with neo-Nazis and right-wing terrorists. But it is not only these openly fascist elements that we are irreconcilably opposed to. The state as such is not our friend, it is not our helper. The state institutionalizes racism. The state would rather let thousands drown in the Mediterranean than take them in. The state protects one thing above all: an economic order in which the well-being of all does not come first.

No serious fight against right-wing terror emanates from this state. Not 30 years ago in Lichtenhagen and not today. Especially not when investigators themselves hoard weapons and draw up death lists. Not only since the self-disclosure of the NSU core trio has it been shown time and again that independent anti-fascist research is needed to effectively uncover neo-Nazi structures and entanglements with state authorities. And also against racist violence it is not the police that helps, but antifascist and antiracist self-protection. So let’s not trust in a state that looks the other way or is itself involved when fascists commit acts of violence. Let’s trust in ourselves and our courage to change. Let’s organize ourselves and the antifascist self-protection - let’s fight for a better world, let’s consequently put fascists and racists in their place and let’s break the right-wing continuity in this country!